Energiseyourlife is proud to be the official UK distributor for the Welles Press. The Welles Press as also known as the Welles Peoples Press is ones of the world’s most renowned juice presses. Used in combination with a masticating Juicer such as the Samson; the Welles Press or Peoples Press, extracts significantly more juice and better quality juice rich in nutrients and minerals due to its ability to extract more juice from pulp fibres than from simply using a Juicer alone.

How the Welles Press Works

First, a masticating juicer like the Samson juicer, extracts juice from your fruits and vegetables. It produces both Juice and finely chopped pulp. The pulp is placed into a pressing cloth, 2 are supplied with the Welles Press, the cloth is folded and placed on the drip tray. The tray is raised using the jack handle, pressing the cloth between the juicing plate and the drip tray, the nutrients and juice are then forced out of the pulp fibres when pressed using 2 tons of pressure. The pressure exerted by this pressing method releases extra nutrients and enzymes that would otherwise 'adhere' to the pulp left behind by juicing machines. You can also use the Welles Press with whole produce such as grapes by placing them directly into the pressing cloth. 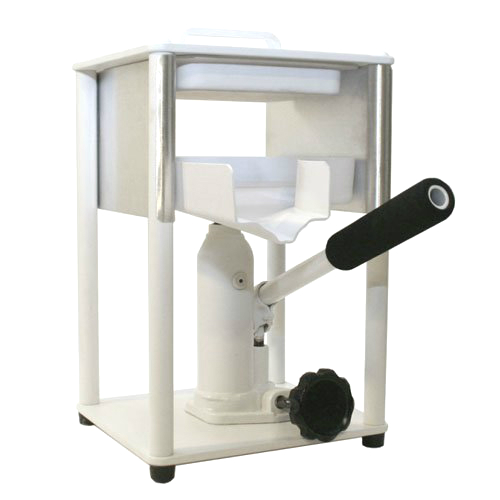 Cleaning the Welles or Peoples Juice Press is simple, just slide the tray out along with the press plate and rinse it in warm water. Rinse the pressing cloth and store it in the freezer to keep it sterile.

Juice pressing was originally popularised by Norman Walker in the early 1900's. He much preferred pressing juice as opposed to centrifugal spinning as the means to get this vital essence out of the vegetables.

The Gerson Therapy for cancer and other serious illnesses insists on the highest quality juice as an integral part of the therapy. The use of a Juicer Press has been recommended by Charlotte Gerson, daughter of the famous pioneer Dr. Max Gerson, as long ago as April 1987.

A Samson Juicer and a the Welles Press together cost less than a quarter of the expense of importing a Norwalk Juicer (a US-made juicer and 1-tonne press combined in one large machine) into the UK.

Why use the Welles Press with your Juicer

Using a Samson Advanced Juicer with the Welles Juice Press

Here John from discount juicers show how to use a Samson Advanced in Chrome with a Welles Press.

Energiseyourlife are delighted to offer a special Samson Juicer and Welles Press package. Save £15 off the Samson 6 in 1 or £20 off the Samson Advanced Juicer when purchased together with the Welles Press! You can read more about the Samson 6 in 1 and Samson Advnaced Juicers in the Juicers section of our website. Simply select the the juicer you would like above when selecting your product and the discount will be applied. 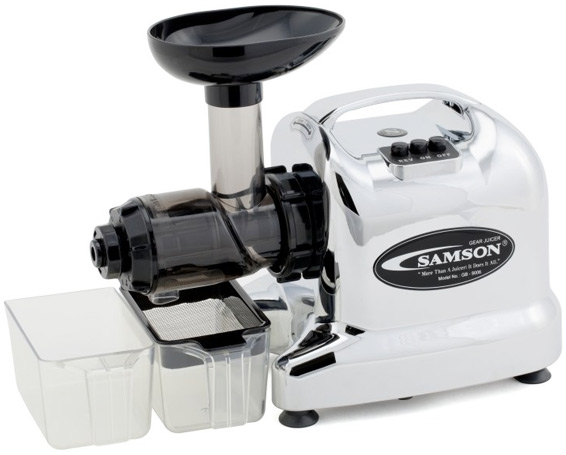